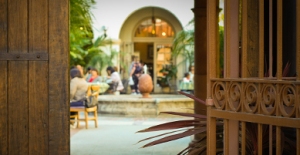 Last Sunday my husband and I went to Fullerton to check out Green Bliss, an organic café/coffee shop that we’d heard good things about. On the drive, I asked my husband, who always has an answer for everything, what Fullerton was known for.

“When I tell people I went to Cal State Stanislaus, no one’s even heard of it.” I said. I don’t think a state college is something that a town is “known” for.

“You’re probably right,” he responded. “I only know that because my ex-girlfriend went to school there.”

After this conversation we determined that Fullerton is known for nothing, but at least they had a vegan-friendly café, which is more than many places can boast.

We arrived at the coffee shop, and it looked adorable from the outside. And the inside was just as charming with a hipster, eco-friendly vibe.

We sat outside on their lush, tropical courtyard. It was beautiful with a fountain and everything!

Our food and drinks came, and I was surprised that our panini’s looked more like sandwiches than the panini’s I was used to. This was probably because we got them gluten-free. Still, they were both delicious! I loved the coconut “bacon” on mine.

The nut milk mochas were outstanding! This place knows their coffee.

All through our lunch, we were serenaded by a young guy playing a Ukulele. This was cool! When we finished lunch I asked if I could take his photo for my blog, and he happily agreed.

Aaron and his ukulele

We chatted with  for a while, and then Aaron blurt, “Hey, do you want to meet the manager?”

“Sure,” I said, and he went in to get the manager, Jenny, who also happens to be the owner’s sister.

Jenny told us about she and her sister’s vision to create a welcoming space that honors Mother Earth. 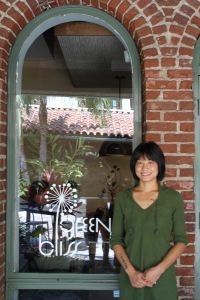 Fullerton may not be known for much, but from now on it will be known to my husband and me as the town where we discovered one of the best vegan-friendly, earth-friendly, allergy-friendly coffee shops we’ve ever been to.

I asked Aaron, who is a photographer, to take the photo of Jenny. You can check out more of his photos and other things he’s into on his blog: aarondelani.com.