A Vegan in Croatia

Posted on October 17, 2013 by celestedimilla

Until just over a month ago, I knew nothing about Croatia, but now I want to go! This came about when my blogger buddy, Mike, shared about his extended tour there. From his posts, it sounded like a wonderful place. When I read about the quiet coves, sandy beaches, bike paths and boutique hotels on the 1,000 plus islands of the Dalmatian Archipelago, however; this beach girl was sold!

But before I pack my bags I need to know if I can eat vegan there? According to Mike’s wife, Florence, the answer is YES! Here’s what she has to say:

A Vegan in Croatia, by Florence Lince

When traveling I always worry about being able to eat right.  Anyone with a special lifestyle can relate, be it having gluten intolerance or nut allergies or even, good heavens, being a Vegan!  Recently my husband and I were selected to participate in a web series called Discover Croatia for Touristar TV.  Never having been to Croatia before we really didn’t know what to expect food wise for me since I’ve decided to eat Vegan (and I’m feeling better all the time!).   There were 12 people on this little exploration of Croatia and the owner of the company who put this together, Lea Brezar, is a fellow Vegan!  How lucky can a girl get?

The Croatian diet is filled with meat; lamb, veal, beef, and lots and lots of fish.  But the best surprise was the vast amount of foods made with only vegetables and no eggs or other dairy.  Lea started out like most vegans, as a vegetarian first and then later giving up all dairy and eggs in order to eat plant-based only.  Since our excursion was planned out well in advance every restaurant knew that we were coming and they prepared some of the best dishes Croatia has to offer for Vegans.

Salads were made to look so appealing – mostly made with shredded cabbage and lots of beans.

These potatoes are a Croatian delicacy – they were washed, cut in half, glazed with a little oil and salt and baked – and that’s it – they were so good.

This was a typical dinner for me – eggplant, zucchini, mushrooms, tomatoes and roasted peppers – they have a lot of green and red peppers in Croatia – served with bread and olive oil.

This was amazing!  This was barley, split pea, carrot and potato soup.  I could have eaten this every day and been very happy!

In addition to all this delicious restaurant fare, there is a farmer’s market in every major city in Croatia.  We went to many of them to buy fresh fruit every day.  I really wish I had a kitchen while there – everything was so fresh. 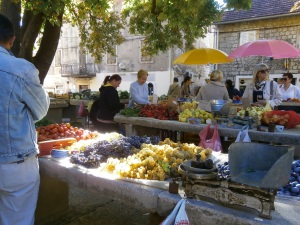 So, traveling and being a Vegan can go hand in hand.  And being in Croatia should be on every Vegan’s bucket list.  Now someone pass me the broad beans.

The first photo of the boat is courtesy of ngewall.com. All photos other photos are courtesy of Florence Lince.

33 Responses to A Vegan in Croatia