I’m Not Judging You!

Posted on September 27, 2013 by celestedimilla 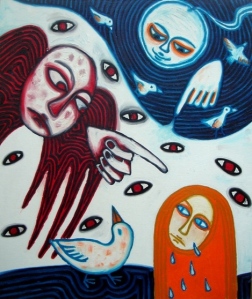 Who likes being judged? I certainly don’t! That’s why I try hard not to judge others.

I may be vegan, but I don’t judge those who aren’t. Who am I to judge anyway – I ate meat and dairy for most of my life. Even if I did judge others, what good would it do? I’d only alienate people and make them less likely to consider veganism.

Still, I often get the sense that others think I’m judging them about what they eat. I don’t know what I’m doing that makes people feel this way. I recently read something, however; that makes sense to me.

“There is comfort in familiarity and complacency, and a vegan approach rattles the status quo. It is always unsettling for people to have their worldview challenged and a vegan’s mere presence can do just that.”

– From The Vegan Sourcebook by Joanne Stepaniak and Carol J. Adams

This is interesting. Do some people feel uncomfortable or that I’m judging them by the mere fact that I’m vegan?

Hey there. I’m Celeste, California girl, writer, psychotherapist and burgeoning plant-based foodie.
View all posts by celestedimilla →
Aside | This entry was posted in Daily Life and tagged animal rights, annoying things vegans do, do vegans judge others?, don't judge others until you've walked in their shoes, judging others, quotes, quotes on judgment, quotes on veganism, should vegans preach?, vegan, vegan lifestyle, vegetarian. Bookmark the permalink.

46 Responses to I’m Not Judging You!