Posted on September 19, 2013 by celestedimilla 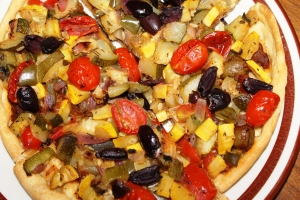 My mother-in-law, Rose, is a worrier, and since she lives in Boston and my husband and I live in California, we get lots of worry calls. Like when there was a fire in San Diego a hundred miles from us, I heard about the fire, are you guys okay. In fact, she worries so much that we’ve never told her that we live near San Onofre Nuclear Power Plant. Why worry her unnecessarily?

When my husband and I went vegan, we hesitated telling Rose about it – we knew she’d worry. Eventually, however; we had to tell her. As we expected, the worry floodgates opened. Are you getting all the nutrients you need? How are you getting enough protein? Don’t you need dairy for calcium?

We answered all her questions and gave her the books, The Engine 2 Diet and Eat to Live. After a while she seemed to accept that we weren’t going to drop dead from a lack of protein.

Then one day she surprised us and told us that she was going to start following a plant-based diet at much as possible herself (which meant as much as my father-in-law would allow). We were excited, and encouraged her hoping that it would help with her long-standing health issues.

For whatever reason, the diet didn’t stick. We were disappointed, but at least she doesn’t worry about the way we’re eating anymore and even cooks plant-based for us when we’re visiting.

In fact, visiting her is a treat because she makes us wonderful plant-based meals. While we were there recently, she made a pizza that was delicious. I asked her if I could share her recipe on my blog and she happily agreed.

Preheat oven according the directions for the pizza dough you’re using.

Saute squash, tomatoes, onion and basil in water until almost cooked, about 5 minutes. Set aside.

Spread eggplant caponata on pizza crust. Top with vegetable mixture and sprinkle with parsley and olives.

Say a little prayer over the pizza (yes, my mother-in-law does this!) and bake according to pizza dough directions.