Posted on September 2, 2013 by celestedimilla 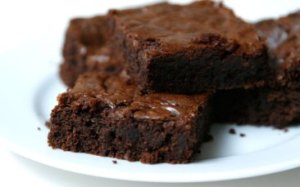 My husband and I are in Boston this week, so I’ve decided to repost some oldie but goodie posts while I’m away. I look forward to catching up with everyone when I get home. Have a beautiful week!

I was excited to learn that my sister’s partner, Linda, decided to go vegan. She’s been struggling with the transition, however; mostly because she doesn’t know what to eat. I recently learned that she’s been subsisting to a large degree on French fries. Yikes!!

So to help Linda with the transition, she and my sis are spending the rest of the holiday weekend with me learning how to cook healthful vegan recipes. Of course one of these recipes will have to be something chocolate!

I have lots of healthy chocolate recipes, but I felt like trying something new. I did an online search and found a whole food vegan brownie recipe that’s sweetened with banana and dates instead of sugar and uses peanut butter in place of oil. What’s more, there’s a whole can of black beans in the recipe! I’m not saying that this makes them health food, but as far as brownies go you can’t get more wholesome than that!

My problem with desserts is that I have the tendency to binge on them. Even healthy-ish desserts are unhealthy if you over do it. When I make cookies or brownies, I usually eat so much that I make myself ill. To prevent myself from doing that this time, I challenged myself not to eat any batter at all and then to allow myself to eat only one brownie after I baked them.

This worked! Not only did I not touch the batter, but I didn’t eat a single chocolate chip. And let me tell you, the baked brownie I ate tasted a lot better since I wasn’t already sick from eating batter.

I will admit, however; that although I technically ate only one brownie I really ate more than this because when I cut the brownies into squares, I sliced and ate silvers off of some of the squares. Oh well, still did a lot better than my typical behavior.

I highly recommend this brownie recipe, they’re healthy and delicious. I will note that I increased the chocolate chips from ½ a cup to 2 cups. If you want a super healthy brownie, you can replace the chocolate chips with dried fruit or use just the half cup of chips. Both my husband and I thought that the brownies tasted just right with the two cups of chips, however.

You can find this recipe at Healthy Vegan Recipes.

One last note, the photo above is not of the brownies I made. I’m still embarrassed by my food photography skills. I promise, however; that I’ll be taking my own photos soon! I just spent $600 on a Canon camera today and I’ll be taking a photography class in a couple of weeks.

The brownie photo is courtesy of Miss A. Her brownie recipe looks delicious too, but it’s neither vegan nor healthy.